What Is Periscope and Why You Should Be Using It 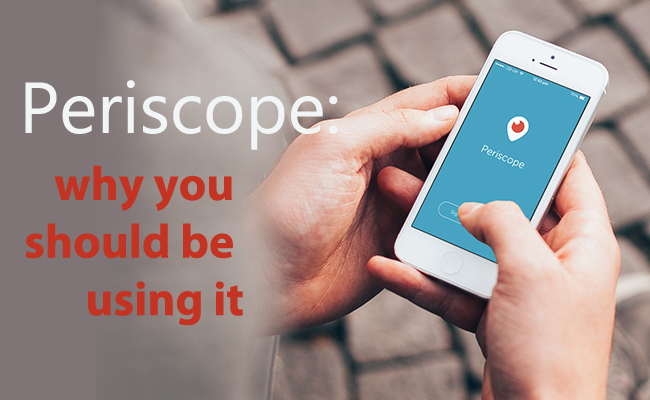 There’s a new social media tool in town and all the cool people are using it. Periscope, the live broadcasting baby of Twitter, allows people to get a glimpse into your life in real time. What makes this soapbox special, besides it’s the only live streaming social media venue, is that viewers can comment (with you or with each other), share with their followers or on social media, or show their support in the form of hearts all while viewing live. Periscope was born by a team of developers who were fascinated by the idea of discovering the world through someone else’s eyes. They reached out to Twitter for help building it, and voila! You now have the closest thing to teleportation! Their dream was that Periscope would be “a visual pulse of what’s happening right now” “giving people a way to share and experience the world around them near and far”.

Now that you’re in the know about Periscope why should you, a Pilates professional use it? Well, most simply put it can grow your business in epic proportions. Granted the earliest adopters of the platform are naturally entrepreneurs, every day more and more Pilates peeps are showing up in my feed and sharing their stuff. Peri people have been seen huge spikes in their sales and notoriety. If you’re doing training program, have a guest teacher, or just want to drive more Pilates instructors to your business, Periscope is a great place to do it. The other added bonus about being first on the scene is that the platform isn’t yet inundated with 100s of teachers just like you. This means that you’ll get more people tuning into your scopes (that’s what what the cool people call Periscope broadcasts), more people following you, commenting, and sharing your stuff. Because it’s new we all feel a sense of kinship. I’ve gotten only support and love the more I scope from the this recently developed community. People are catching on and fast.

Ready to put your toe in the scope infested waters? Don’t fret my pet! Here is a Periscope 101 to get you started in the Wild Wild West of social media platforms:

That’s right it’s an app for your smartphone. Use your Twitter handle, and if you’re not on Twitter (that’s a discussion for another day) pick a handle you’ll want to live with because once you’ve created an account the peeps at Periscope won’t let you change it.

If you’re already on Twitter (remember that this platform works best in tandem with Twitter, so ahem, you should really get on there too) the app will show you a list of peeps you’re already following that are on Periscope. Right now you don’t have the ability to search for people based on hashtags (like #Pilates) but the word on the street is that’s in the works. I’ve listed below a quick list of my favorite Peri-folks I follow. Remember to enable your alerts for people you follow more on that in #3

Here’s the key here people, LIVE! Periscope is a live broadcasting platform so the best way to experience the wonder that is Periscope is to join a live broadcast. While you can watch via your computer it doesn’t allow you to comment so what’s the point? Use your smart phone…it’s smart! If you’ve done what I’ve told you and enabled your alerts you’ll get a notice when someone you follow is live so you can jump right on. Then don’t just be a voyer, interact! Double tap the screen to give them some hearts, join the conversation by typing in the discussion box, swipe right on an iPhone and up on an Android to share the broadcast, or simply tap on someone’s name or comment to follow them and grow your tribe! This is how you gain more followers yourself and learn what you like and dislike by watching other people’s scopes.

So that’s just a taste of the goodness that is Periscope. Check back for my follow up blogs on this hot topic. My next blog will be more in depth to get you started scope-ing right away!

Join Lindsay in her New York Studio or Online for a Pilates Business Social – The Influence of Visibility (click here).

Featuring Kristin McGee – a Pilates and Yoga instructor to the stars. A former actress, Kristin knows a thing or two about being in the spotlight and has used her charisma to catapult her and her brand to VIP status.

Lindsay Lopez is a dynamic force of nature. Years in tutus and tights paid off with wild success as a dancer and actress. Years in the “biz” taught her that dreams can come true, with plenty of planning and TONS of action to back them up. After what had become ten years in the Pilates industry her devotion shifted from the bodies in front of her to the teachers educating next to her instead. Although Lindsay teachers less and less, she is breathing new life into a stale industry. Her wish is to provide her peers with the business training they so desperately need. As a positive coach and gutsy mentor, Lindsay Lopez is changing Pilates business for the better at www.formpilates.com