Teaching Pilates if You Are NOT a Native Speaker

My name is Xenia Preveziotis, I was born and raised in Greece. When I was in my late 30’s my life’s journey took me away from my country as I followed my husband to a very new and very challenging path, the military, relocating in many different countries around the world.

My native language is Greek but we were encouraged as young children to learn at least one foreign language as most of the world doesn’t speak Greek. I learned 3 languages , French then English and then Italian and although they helped me greatly with my various professions before I became a Fitness and Dance Instructor, I never thought I would be in a position to teach Pilates, Yoga, Dance and Fitness in general in a language other than my own.
When you learn the everyday language with its idioms and slang you must be careful as some polite words in one language are offensive in another and vice versa.

Even though the basic obstacle to learn a foreign language is our mother tongue , there is an oximoron to our advantage. Our mother tongue is actually the most important means of coding a foreign language in our brain. So learning to speak and teach in conjunction with my mother tongue, was what helped me the most. I made many mistakes along the way but I found it helpful to always ask my community to let me know if i said something they did not understand to avoid misunderstandings. Drama nevertheless was at times inevitable.

I was also listening daily to local radio stations, reading newspapers and listening to music by local artists and attending local events. Through ethnic dances I learned a lot about body language and different gestures that correspond to a specific culture. Additionally I was attending other instructors’ classes and by listening to them I was able to grasp the flavor of the language as well as some useful suggestions for cuing. 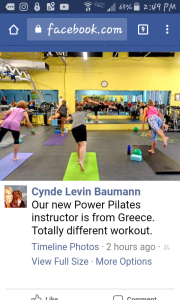 Those who joined my classes became my most valuable teachers. There were many times I was mocked about my accent, but there were also those who actually enjoyed my accent especially when I added a few greek words here and there. For example, when we count repetitions, in order to ease the … “burn” I would count in my language. My students were entertained and I was holding on to who I am and where I came from.

It was much harder to learn all the technical and anatomical terms. I spent many hours placing this information correctly in my head. There was no other person around speaking my language so the idea of having a group study was not very helpful to me. Thankfully, certain terminology was quite easy as many terms were either greek or latin so I actually excelled in anatomy .

Attending courses and workshops was also very overwhelming as many of the Teachers were talking fast and some would not listen to my plead to slow down so that I could understand them better. I ended up using a recorder (with the teacher’s permission, of course!) to record the session and then listen to it at home over and over again. The only problem with this approach is that I am a visual learner so I spend a lot of time reading and writing words over and over again to give me a more visual image of their meaning. During test-outs and exams I never hesitated to raise my hand and ask a word definition to help me understand the question better and 8 out of 10 times this worked well. In the end all we have to do is ask, no?

In every relocation not only I had to learn and teach in a different language but also at times I had participants who did not speak any of the languages I knew. I learned to use both body language and speech to help them, cue them but also make them feel encouraged, welcome and appreciated!!! To me that was one of the best lessons when approaching a foreign language, the combination of speech and body language.

Despite all the obstacles teaching in a second language has been a huge blessing to me. It pushed me to grow continually, appreciate different populations and ethnicities and learn how to express myself better as a teacher and as a person. I feel so fortunate that I could use and learn another language in such a productive way.
While in the military we lived in places that were remote and most people didn’t even know about the movement modalities that I was teaching. I was like an alien from another planet. But even then my passion for teaching was what connected me to local people and built a bridge of communication for us. One small practice at a time, one word and gesture at a time, “a completely different vision of life all together” as Felini once said!

Language should never be a barrier when teaching and also not be the only way of teaching! This life lesson taught me that “we are not learning different words for the same thing, but learning another way to think about things“! As teachers we need to be brave to show our personality and where we come from, our roots, our culture, not influenced by ignorance and fear of the barrier of language!

A foreign language is like a frail, delicate muscle. If you do not use it, it weakens.
– Jhumpa Lahiri

Movement for Xenia is therapy, expression of love, and a beautiful way to Give back to others, and so all the methods she learns and teaches have the same mindfulness, fluidity, creativity and love for every-body. Born and raised in Greece, have been away from her country for over 18 years now trying to make the best out of so many difficulties, relocations and military situations, her love for movement and dance led her to scholarships to further her education, All her travels pre and post military have added so much appreciation for each country, nationality, and .. oh the variety of styles .. Her first dance teacher was her grandmother from Asia Minor and her first music teacher was her nona ( grandmother from Corfu.) Together they instilled in her that the biggest treasure is our heritage and that Dance and Music are the most beautiful gestures to celebrate…. LIFE. SMILES!
Follow Xenia on Facebook